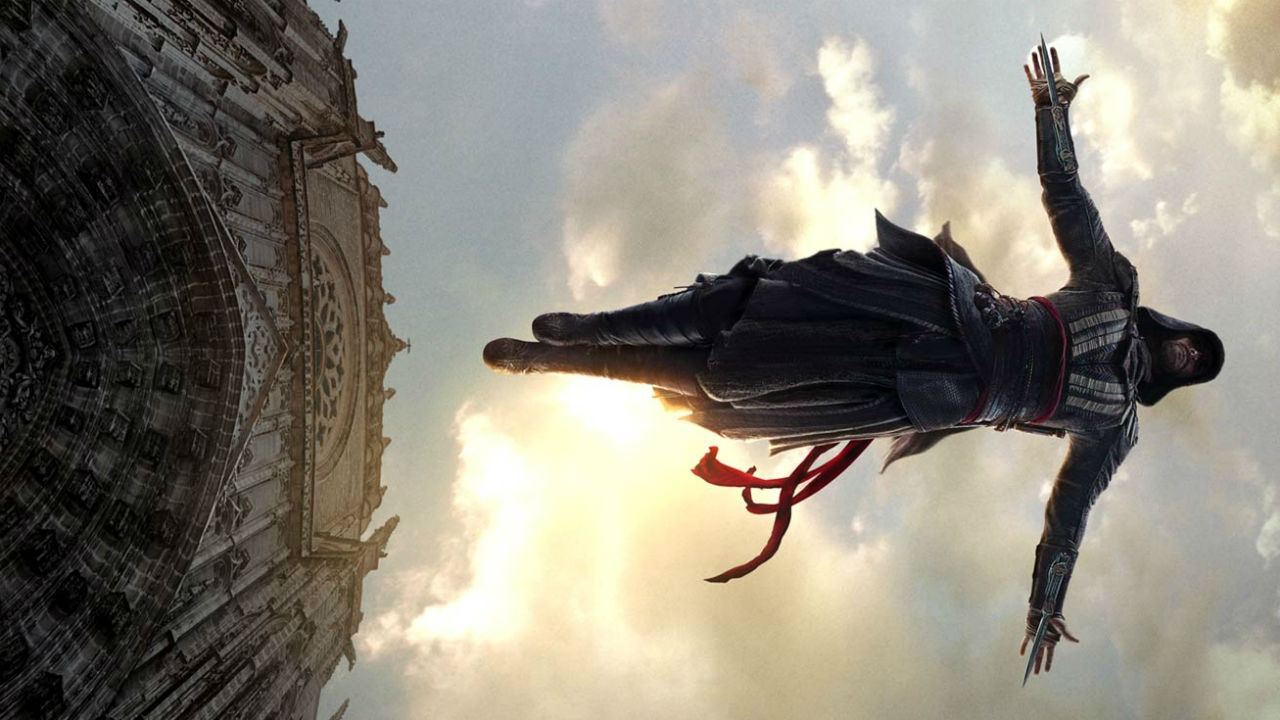 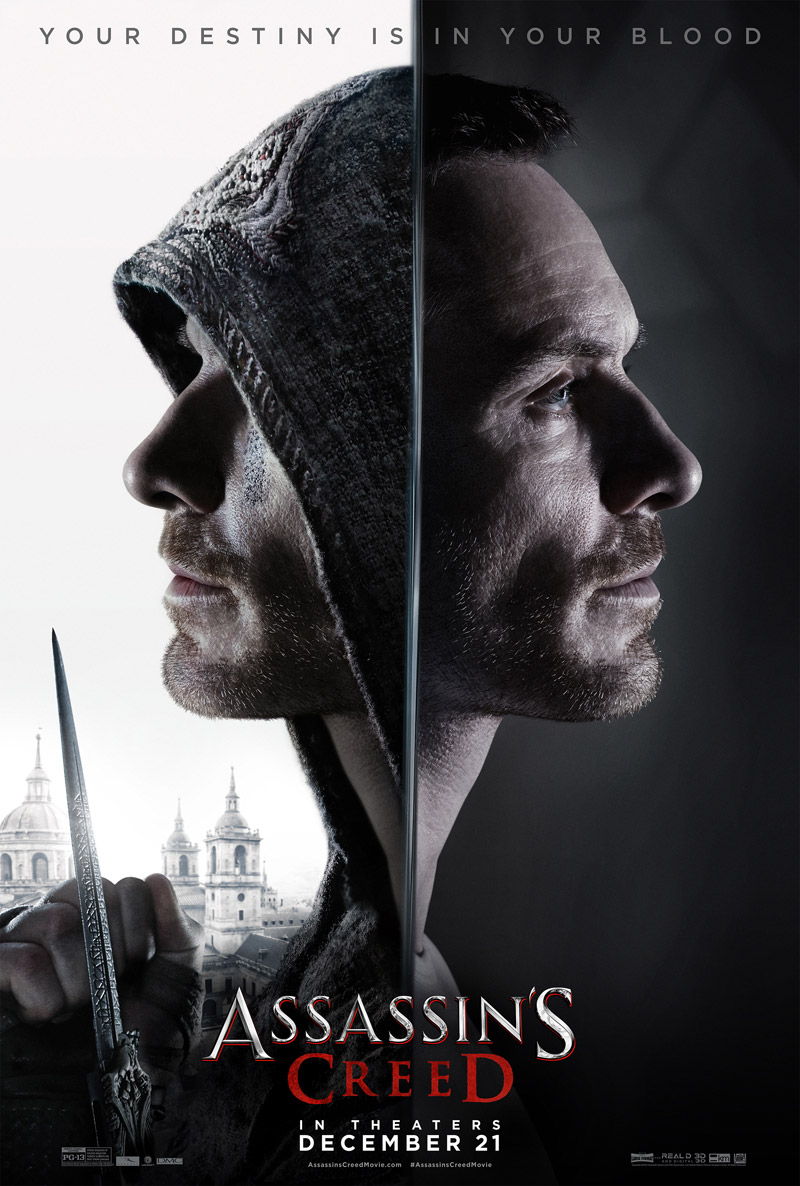 When Callum Lynch explores the memories of his ancestor Aguilar and gains the skills of a Master Assassin, he discovers he is a descendant of the secret Assassins society.

When it comes to video game franchises, Assassin’s Creed is an industry giant: with nine full games and 17 spin-off titles, this multi-platform monster has inspired short films and frequent novelisations too. So it was only a matter of time before Hollywood got its hands on this tale of past and present, ancestors and descendants, and the warring-for-centuries Assassins and Knights Templar.

Mindful of the ropey reputation of games-to-movies – Duncan Jones’ Warcraft being the latest disappointment in an increasingly long line – Ubisoft, who are on board, has looked to buck that trend. The core creative team gathered here is exemplary: Australian director Justin Kurzel reunites with Michael Fassbender (who also produces) and Marion Cotillard, who together starred in Kurzel’s 2015 muddy and bloody Shakespeare adaptation, Macbeth.

Factor in co-stars Jeremy Irons, Charlotte Rampling and Brendan Gleeson and you have an undeniably impressive roll-call. Rarely has a video game adaptation boasted such acting heavyweights.

So does it work? Well, yes and no. Ambitious and stylish, it’s a loving recreation of certain elements that make the series so popular. But emotionally? It’s dead-weight, Kurzel and co. struggling to make us care about the characters caught up in a chase for the series-staple McGuffin – an Apple of Eden.

The film starts in 1492 in Andalucía, Spain, with captions introducing us to the central premise: the Apple of Eden, said to contain the genetic code to man’s free will, is being sought by a group known as the Knights Templar. Those who possess an Apple will be able to control freedom of thought – but standing in the way of the KT are the Assassins. At the forefront of this secret society – “we work in the dark to secure the light” – is the ultra-limber, tattoo-clad Aguilar (Fassbender).

As fans will swiftly gather, Assassin’s Creed doesn’t follow the adventures of Desmond Miles or any of the main protagonists from the games. Rather, it creates a new character to drop into a familiar world.

After a brief scene in Mexico 1986, where we meet the young Callum Lynch just as he discovers his own father has sliced up his mother, we cut to a Texas penitentiary in the present day. Cal (now played by Fassbender) is a convicted killer, about to face lethal injection. His last words? “Tell my father I’ll see him in hell.”

Rather than meet his maker, Cal wakes up in a secure rehabilitation facility in Madrid. “You no longer exist,” says the watching Dr. Sophia Rikkin (Cotillard). Quite how the company (Abstergo) owned by her father Alan Rikkin (Irons) managed to extricate Cal from Death Row in America is never explained. But given they’re being bankrolled to the tune of $3 billion a year by a shadowy outfit called ‘the Elders’, led by Charlotte Rampling’s Ellen Kaye, we’ll assume they’re quite powerful.

When it becomes clear that Cal is the last descendant of the Assassins brotherhood, the Rikkins want to plug back into the ancestral memories lodged in his DNA. Why? “To pioneer new ways to end violence,” he is told, one of the more frustratingly vague elements of the script by Adam Cooper and Bill Collage (who penned Exodus: Gods and Kings) and Michael Lesslie (Kurzel’s Macbeth).

Locking into a device called the Animus (which is very different here than in the games), Cal is suddenly whisked back 500 years and into Aguilar’s storyline. As Aguilar runs, jumps, fights and climbs, so Cal does the same – becoming stronger and more agile as he is manoeuvred around the lab by a giant pincer. It’s one of the film’s more impressive visual motifs, brilliantly realised – likewise, the ‘bleeding effect’ visions, where Aguilar appears to be in the same room as Cal.

Returning to the 15th Century, where Aguilar and his fellow Assassins are looking for the Apple amid a story that involves the young Prince of Granada, the Spanish Inquisition and the burning of religious heretics, Kurzel captures the feel of the games impressively.

From stealth moves to air-assassinations to gravity-defying leaps, there’s exhilaration to spare. The problems lie with the frequent switching back-and-forth between timelines, ensuring no real rhythm is ever established between past and present. As the last three X-movies proved, Fassbender is perfectly adept in physical blockbuster roles, but even he struggles with Cal, a character with “a pre-disposition to violence” with whom it’s rather difficult to develop any meaningful connection (even when Brendan Gleeson, as his father, turns up).

Irons and Cotillard are engaging presences, but have little to work with here. Their father-daughter relationship, and the differences that divide their approach to science, are explored in only the most cursory of fashions. Better, perhaps, are the others in the Rikkins’ facility, in particular Michael K. Williams (Omar from The Wire), who plays one of Cal’s fellow inmates and – in a third-act surprise – proves just how handy he is in a fight.

Perhaps the biggest issue is the very centre of the story. The war between the Assassins and the Knights Templar, and the quest for the Apple, never feels particularly tense or high-stakes. A final segment in modern-day London (shot in the stunning Freemason’s Hall) ought to lead to an explosive climax, but you can’t help feeling underwhelmed by a story that never really manages to fuse its connective tissue into anything significant.

Of course, the set-up suggests a sequel may be forthcoming – but the very past/present nature of the Assassin’s Creed games suggests the difficulties that blight this adaptation would dog any future film. Still, credit Kurzel and his regular DoP Adam Arkapaw for recreating the spirit of the series. In an age when Hollywood has apparently little regard for video game tie-ins, Kurzel’s team – along with Ubisoft – has tried admirably to protect fan interests. If only they’d had a better script…