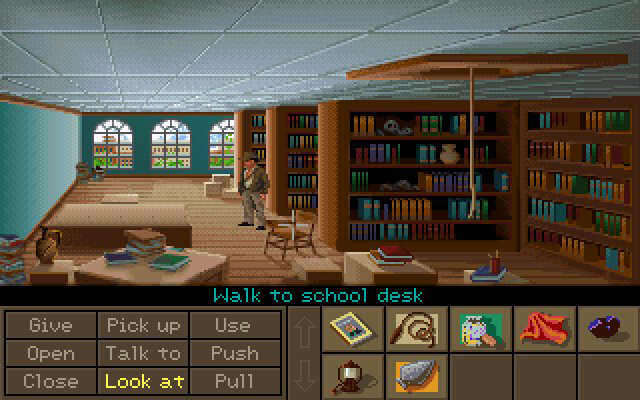 Indiana Jones & The Last Crusade: The Graphic Adventure is a popular graphic adventure game (similar to Maniac Mansion or The Secret of Monkey Island) released by LucasArts for DOS, Amiga, Atari ST and Macintosh systems in 1989. The player controls Dr. Jones as he interacts with various characters and visits areas from the film in order to find the secret of the Holy Grail. The game was re-released twice – first with 256 colour graphics and a full digital soundtrack, and later with 256 colour graphics, minor bugfixes and the original version’s MIDI soundtrack. Of all the software adaptions of the film, this one is the most popular with both gamers and critics alike.

Indiana Jones and the Fate of Atlantis is a point-and-click adventure game by LucasArts originally released in 1992. The seventh game to use the script language SCUMM by Ron Gilbert, Fate of Atlantis has the player explore environments and interact with objects and characters by using commands constructed with predetermined verbs. It features three unique paths to select, influencing story development, gameplay and puzzles.

The plot is set in the fictional Indiana Jones universe and revolves around the eponymous protagonist’s global search for the legendary sunken city of Atlantis. Sophia Hapgood, an old co-worker of Indiana Jones who gave up her archaeological career to become a psychic, supports him along the journey. The two partners are pursued by the Nazis who seek to use the power of Atlantis for warfare, and serve as the adventure’s antagonists.

Fate of Atlantis was praised by critics and received several awards for best adventure game of the year. It became a million-unit seller and is widely regarded as a classic of its genre today.